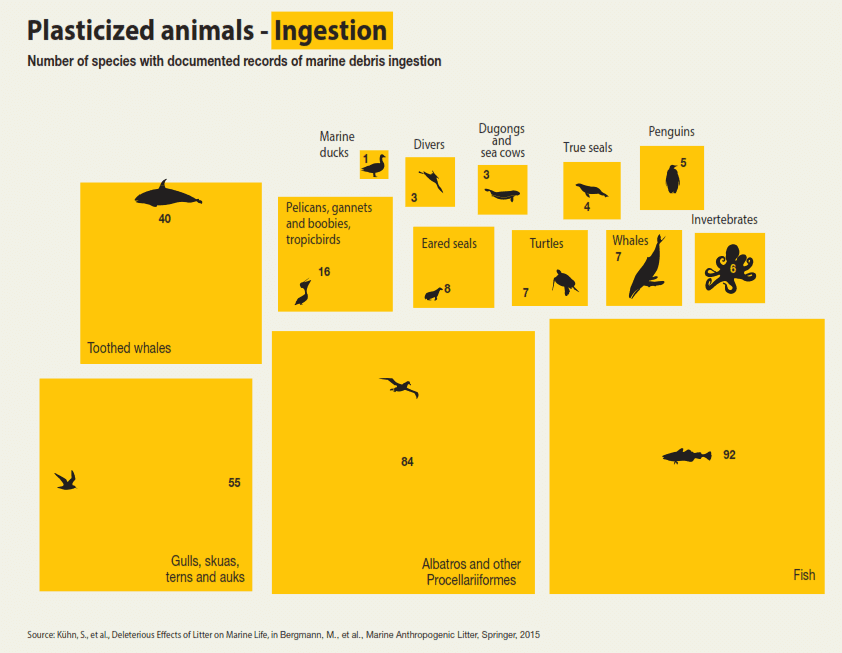 The global production of plastics in 2014 was 311 million tonnes. It has been estimated that in 2010 alone, between 4.8-12.7 million metric tons of plastic found their way into our oceans. Plastic debris and microplastics is transported by ocean currents across
borders. It is found everywhere, even on the remotest shores of uninhabited islands, in the Arctic ice, the deep ocean and in a broad array of marine organisms. Whether due to poor waste and wastewater management, accidental losses that could have been prevented,
or illegal dumping, the “leakage” of this debris into our oceans has serious environmental, social and economic consequences. It harms wildlife, safety of sea transport, fisheries, tourism, recreation, it threatens marine ecosystems and morally should be considered
a common concern of mankind.

Microplastic particles are found in a large variety of marine organisms, including species we consume as seafood. The sparse knowledge on levels and effects does not indicate a health risk to humans now, but the uncertainty is high. The smallest plastic particles –
the nanoplastics, are of even larger concern. They are so small that some can enter organs and body fluids of organisms, and due to their high surface/volume ratio they can carry larger amounts of environmental toxicants. Plastic debris breaks down very slowly in
the marine environment, especially under cold and dark conditions. Levels of nanoplastics in the oceans, and how much of the plastic which is ultimately fully degraded, is not known.

While our knowledge of the impact of plastics in our oceans is incomplete, what we already know shows we should not wait before taking action.

This report presents both short- and long-term approaches to the problem of marine plastic debris and microplastics. It provides an overview of the latest science and experiences, identifies priority areas of action, and points out areas requiring more research.
Improved waste management is urgently needed to reduce the flow of plastic into our oceans. We need to spread knowledge on why and how, and change social attitudes.

We need to get smarter about plastic, adopting a more circular economic model. We need to drastically reduce our use of single-use plastic items, and phase out microbeads in cosmetics and other products where it can be substituted with non-harmful alternatives.
Unfortunately, the need for clean-up actions will still be there, and even increase in many areas. Clean-up of vulnerable areas needs to be prioritized.

Marine litter is a transboundary concern, requiring collaborative action — not simply from governments, but from industry and consumers as well. Regional cooperation and action plans, and cooperation through the Global Partnership on Marine Litter, is recommended
to prevent further pollution at all levels. Strengthened International cooperation and local action are both necessary to follow up on the 2030 Agenda for Sustainable Development, including reaching the Sustainable Development Goal on Oceans.

This report is accompanied by a stand-alone set of policy recommendations. They are intended to guide decision makers to take action that can be adapted to different local, national, regional and global contexts. In the 60 years since its large-scale introduction, plastic
has become a natural and necessary part of our daily life. However, its negative consequences when ending up in the environment can no longer be ignored.

It is our hope that this report and the recommendations will inspire and catalyze immediate action at all levels – it is only through joint efforts that we can have an impact and improve the state of our oceans for future generations. We need stronger international commitment
to combat the plastic pollution of our oceans. The time to act is now. We have no time to lose.